One of the most beautiful areas of Taiwan

It is one of the most important highlights of Taiwan for many and with good reason: Taroko National Park in Taiwan is a must see. Expect fantastic gorges, marble cliffs, waterfalls and an abundance of hiking trails. Also without the hordes of people you might encounter in similar natural areas in other parts of the world. Discover the most beautiful spots, where to stay and the best time to visit in this article.

The Taroko Gorge is one of the highlights of the park. The Liwu River churns here along steep rock faces and makes its way to the ocean. The gorge and the park are an important source of jade and marble, hence the nickname "marble gorge”.

There are many hiking opportunities in the area and a you will have a chance to see incredible wildlife. So far, 152 species of birds have been recorded in the park, including 14 species unique to Taiwan, such as Swinhoe's Pheasant, Formosan BIue Magpie and the Fire-breasted Flowerpecker. At least 15 species of amphibians are found along the rivers and on the medium-altitude mountain slopes. Researchers have also identified 302 species of butterflies [1].

Officially this place is called Changchun Shrine, but in practice it is more often called 'Eternal Springs'. The Eternal Spring Shrine is a sacred place and a memorial to Taroko veterans and people who lost their lives in the construction of the highway. From the lookout point you get a fantastic view: This is one of the most photographed sights at the Taroko Gorge. 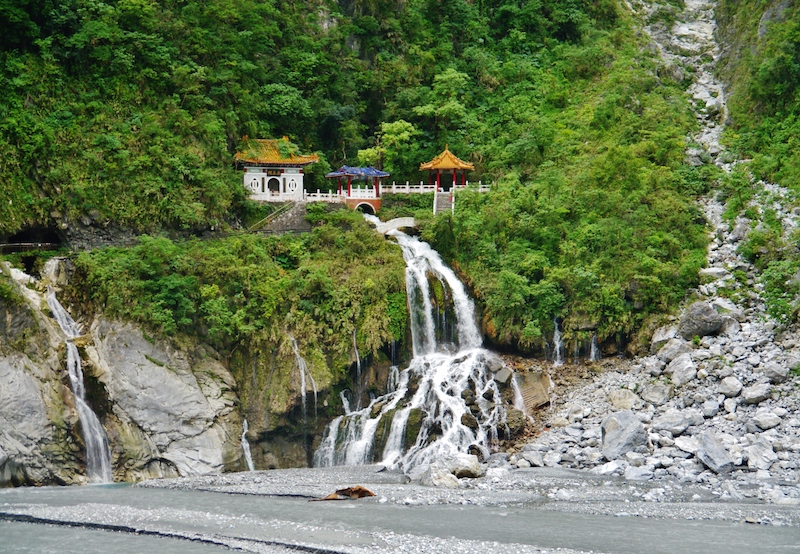 It is beautifully situated, setting by green mountains and above a waterfall. Due to landslides, the memorial site has had to be rebuilt several times.

The Yanzikou (Swallow Grotto) trail is half a kilometre (0.3 miles) long. Here, part of the highway leads you through tunnels carved into the gorge. From the entrance to the Swallow Grotto to the Jinheng Bridge, you have many fantastic viewpoints of the Liwu River
.
Expect unusual rock formations and interesting potholes.

Officially not part of Taroko National Park, but the Qingshui Cliffs are so close and so worthwhile that you should definitely make a stop. Along the Suhua Highway a number viewpoints have been made (be sure to stop at the parking lot just after the Chongde Tunnel).

Here you get to see the bluest sea you've ever experienced to poison green nature and tall, gray mountains. And with a little luck, a train will pass underneath you.

If you only have one day, you don't really have time to walk a long trail (or you have to skip the rest). If you still want to feel like you did some hiking than follow the Baiyang Trail. From the parking lot, it's a 1.9 kilometre (1.18 miles) hike to the Baiyang Waterfall. By the way, do bring a flashlight because you have to walk through several tunnels (which are pitch black).

North of Hualien is you have the "Chi Hsing Bay. The beach here is still largely untouched and offers a spectacular backdrop of mountains. It is a great place to relax. On the south side of the village there is a large tea house, which overlooks the sea. We recommend to enjoy a tea there.

If you want to take a hike in the park, you should definitely set aside a whole day for it. The Zhuilu Old Trail is best walked between early morning and 6 pm. The hike is only 10 kilometres (6.2 miles) long, but because you go up (and down) quite a bit, this vertical hike is a real challenge and a good condition is therefore required.

A special place to stay in Hualien City is Taroko Village. Since the hotel entered into business more than ten years ago, they always insist focusing on conservation, environment protection, originality, art and culture.

The village valley of green grasses is surrounded by dominant mountains. The poetic and picturesque scenery attracts a lot of tourists who love natural ecology as well as art and culture who come to stay with them.

How to get there

Most people will depart from the town of Hualien. There are several ways to travel to Taroko National Park from here. The entrance to the park is about 20 km (12.4 miles) above Hualien.

Train : From Taipei you can easily take the train to Hualien. The train from Taipei to Hualien takes about 2 hours and is around 10 US dollar. The travel time does depend on which train you choose, as there are also slower routes and these tickets are often even cheaper.

Scooter: The nicest way to travel is to arrange your own transportation, preferably a scooter. That sounds easier than it is, because officially in Taiwan you need a Taiwanese driver's license to get a scooter. But always someone who will turn a blind eye to the rule. Be aware, however, that if you are checked by the police you will be fined. The drive to the park entrance takes about half an hour.

Bikes: You can also rent a bicycle from Giant (next to the train station) for a day and take it on the train (Local Express). You can take the local train to Xincheng Station from Hualien train station. The entrance to the park is five kilometres away.

Bus: Prefer to go by public transport? You can! From the bus stop at Hualien train station there's a direct bus to Taroko National Park, which also makes several stops in the park.

Cab: Another option is to hire a cab for the day. This can be done just at the cabs in front of the train station in Hualien. The driver will take you everywhere and wait for you if you want to see something.

If you're going to Taroko National Park it's advisable to check the weather forecast beforehand. When there has been too much rainfall or when Taiwan has been hit by a typhoon, there is a big chance that parts of the park will be closed. If any parts are closed, you can most likely find it on their website or you can inquire at your hotel. The rainy season normally runs from May to October in all of Taiwan and the best travel time is from December to April. Click here for more climate details in Hualien City.

WHAT ELSE TO DO IN Asia ALL MONTHS