The Pyramids of Giza are impressive and absolutely worth a visit

Although Egypt wasn't my favourite country in the world, you can not deny yourself a trip to the Great Pyramids of Giza. The pyramids are considered to be one of the seven wonders of the world in ancient times and they are the only one that still exist and can be visited today. The Pyramids of Giza are almost 5000 years old, it's the pride of Egypt and we understand why.

Once you stand at the foot of the pyramids you will only notice how massive they really are. We recommend to go early, only 300 people are allowed into the narrow corridors and on the steep slopes of the Pyramid of Cheops every day. The Pyramid of Cheops (also: Great Pyramid of Choefoe) contained about 2.3 million blocks of stone, each weighing an average of 1.5 tons (this is the same weight as 3 huge trucks).  What I love is that how these pyramids have been built remains a mystery until this day. 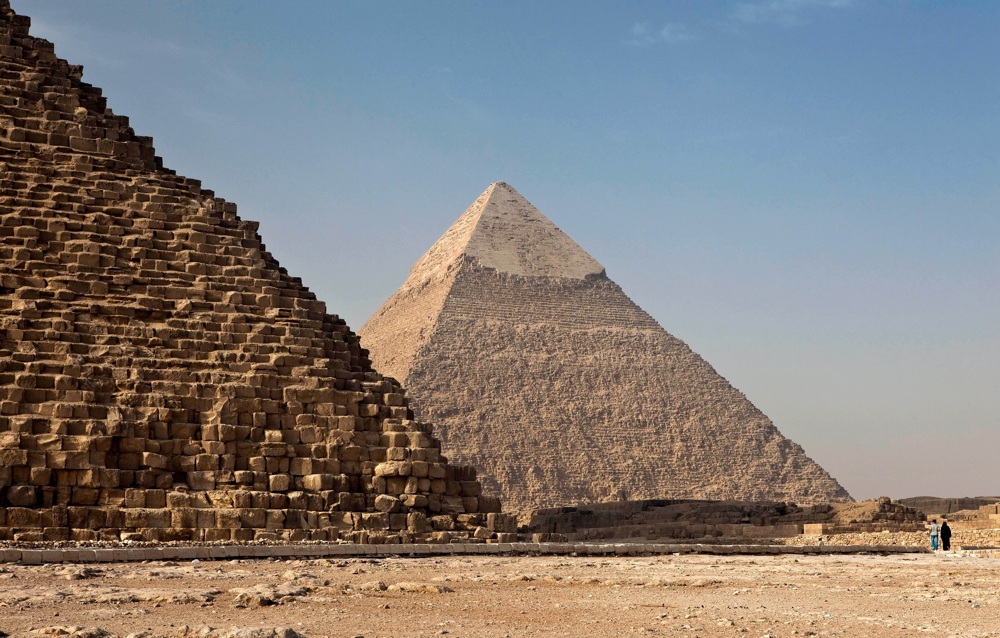 In total you will find eleven pyramids seemingly close to each other. On the plateau of Giza are three of the most important pyramids of the country: Cheops, Chefren and Mykerinos. They seem so close, but when you get out of the car their size is distorting. They are not that close to each other at all.

The sphinx has been buried under the desert sand for centuries. Now it's held together with all his might. It is twenty meters high, 57 meters long and 7.5 meters wide. Anatomically, the sphinx has never been perfect. He has a too small human head on a giant lion's body.

You can enter the pyramids. At least if you don't suffer from claustrophobia. The hallways and stairs are low. It's crowded, hot, musty and the air inside is heavy. Actually, there's not much to see inside the pyramids. It is mostly an empty space with hieroglyphics and you can visit the place where a tomb with the mummy once stood. However all pyramids have been looted over time. What was left of valuable historical material after these violations can now be found at the Egyptian Museum in Cairo. But still even if there is not much to see we recommend to go in anyway.

How do you get there

A weekend in Cairo may not be the most obvious city trip, but it is the best base for visiting the Pyramids of Giza. The majestic pyramids are located just a few kilometers south of Giza, a suburb of Cairo. Giza is a multi million-dollar city in itself, intertwined with chaotic Cairo.

The distance from Tahir Square to the pyramids is approximately 15 kilometers. In fact, the desert begins here. There are several possibilities to travel from the city to the pyramids of Giza. For less than fifty cents, board bus 355 or 357, reasonably comfortable air-conditioned buses, they stop behind the Egyptian Museum. A simpler option is to take a uber. From Tahrir Square, a one-way ticket will cost you 8 US dollar euros. A popular way is to book an organized day excursion, where you go private or with a group. Easy, but not very flexible or adventurous.

Keep in mind that Cairo and Giza are very busy cities with regular traffic congestion. Also at the pyramids of Giza it is super busy, both by the tourists and by the local entrepreneurs. They passionately praise their merchandise.

If you are not on a budget we recommend to stay at the Marriott Mena House which is overlooking the Great Pyramids of Giza. This amazing hotel is surrounded by 40 acres of green gardens and the property is simply gorgeous. It’s situation across from the pyramids in the most secluded and serene atmosphere will take your breath away. 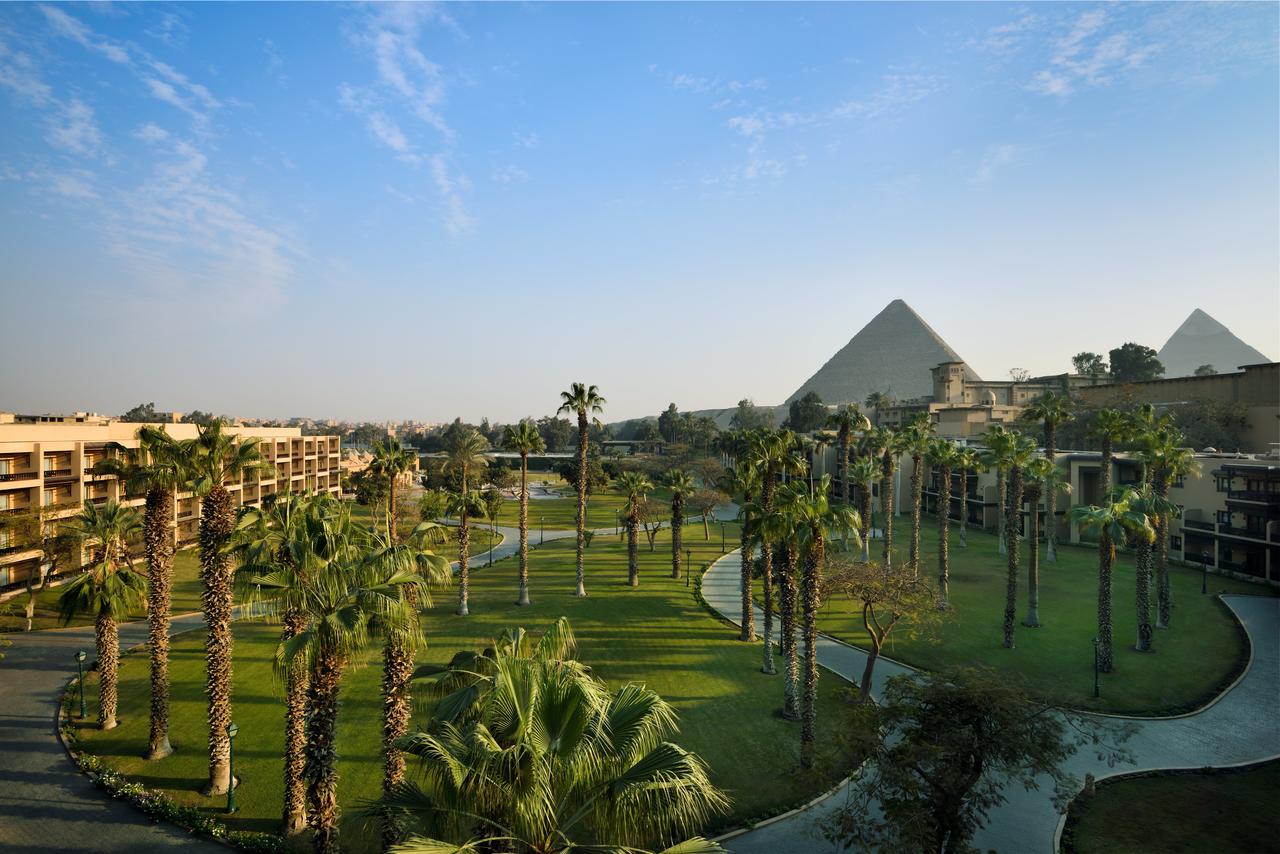 We also love that Marriot minimizes its environmental footprint and is considered an eco-friendly hotel. They are managing their energy and water use, reducing their waste, carbon emissions and increasing the use of renewable energy.

In countries like Egypt you will need to be be aware that some will see you as a tourist where they can earn money from. Some will tell you that you 'have to pay money due to government rules', don't believe it and walk away. Also we recommend to take a really good hotel, listen to the tips from the staff and best to take an Uber. It doesn't cost much and it is super safe.

Throughout the year days are commonly warm or hot, and nights are cool. Cairo has only two seasons: a mild winter from November to April and a hot summer from May to October. Cairo receives fewer than 30 millimetres (1.18 inch) of precipitation annually. The best time to travel to Cairo is during the winter, between December and February, when temperatures range between 20 to 26 degrees Celsius (68 to 79 degrees Fahrenheit).  Click here for more climate information in Cairo.

How much does it cost?

The entrance fee for the site is 12 US dollar, you will have the time to admire everything from 8 am to 5 pm. If you want to visit the pyramid of Cheops inside, you pay 30 US dollar. On an organised excursion from Cairo, including transport and entrance, you'll soon end up at 60 us Dollar. The cost for an excursion from the Red Sea area is double for the bus ride.

Since the beginning of the Arab Spring, it has been unsettled in Egypt. The tourist flow from the Red Sea area has dried up because these excursions are hardly offered any more. These conditions have meant that in recent years things have become a lot quieter at the pyramids of Giza. Good for your visit, but the peace has its reasons. On the website of your Government you can keep an eye on the current situation and view the travel advice.

The Sinai Peninsula: Nowhere on earth is as quiet as this place

The Sinai Peninsula has an extraordinary and enchanting landscape. The peace and space in this region is overwhelming. Nowhere on earth is as quiet as this place.

Malawi: The warm heart of Africa

Malawi is a beautiful country where you can still be a pioneer as a traveler. It is known as one of the poorest countries in the world, but has a very friendly population with different traditional tribes.