When most people think of Africa, they think of vast expanses of open savannahs, lions, elephants roaming the plains, and perhaps a few exotic villages dotting the landscape. But another side to this unique content that is often overlooked is its mountains.  If you are considering climbing Mount Kilimanjaro, this blog post is for you.

In it, we will discuss Mount Kilimanjaro, why you should climb it, how to prepare for the climb, and what you can expect on the journey up. The Kilimanjaro with its 5895 meters (19340 ft) is the roof of Africa. Climbing Kilimanjaro is a crazy experience and if you like adventure it’s an absolute must for your bucket list. It is one of the most adventurous hikes that you can make as an amateur climber. So if you are ready to conquer Africa's highest peak, keep reading!

What Is Mount Kilimanjaro and Why Should You Climb It?

Mount Kilimanjaro is Africa's tallest mountain. It is often referred to as the roof of Africa. It is located in northeastern Tanzania and rises 19,330 feet (5,892 meters) above sea level. Mount Kilimanjaro is a volcano made up of three volcanoes: Kibo, Mawenzi, and Shira.

People are drawn to Mount Kilimanjaro for many reasons. The mountain is one of Tanzania's most popular tourist destinations and attracts climbers worldwide. Still, most come for the experience of standing on the roof of Africa.

Although the trails during your ascent of Mount Kilimanjaro are not steep, the summit night is still quite tricky. Hikers experience decreased oxygen levels (by 49%) and colder temperatures near the top of the mountain. You will climb 4,084 feet (1245 meters) and descend nearly 6,870 feet (2,049 meters).

During the climb you walk through five climate zones and the temperature can vary from + 25 degrees Celsius (77 °)  at the start to -15°C (77 °F)  at the Uhuru Peak. Nature on Mt Kilimanjaro is overwhelming and very special. Due to the change in temperature and climate, the landscape changes from agriculture to tropical rain forest to a lunar landscape above 4000 meters (13000 ft).

How To Prepare for the Climb

If you plan to climb Mount Kilimanjaro, you should do a few things to prepare for the trek. First, you need to be physically healthy as the climb is strenuous. It would be best if you also had some experience hiking and camping, as you will be doing both on the mountain.

To prepare for your climb and give yourself the best chance at success, it is recommended that you start training three months in advance. This will allow you to slowly build cardio endurance with running, biking, or swimming exercises.  In addition to being physically prepared, you should also be mentally prepared for the challenge. The ascent of Mount Kilimanjaro can be taxing both physically and mentally, so it is essential to be in the right frame of mind before beginning the climb.

The top of the Kilimanjaro can be reached via various routes. The most famous are the Machame route, the Marangu route and the Lemosho route. Depending on the route, you can choose between a 5-day climb up to 9 days. Climbing the Kilimanjaro is not a technical climb, the challenge is more in the immense height of the mountain and the very fast altitude difference. Anyone who climbs the mountain can suffer from altitude sickness; top fit or untrained.

The Different Routes to the Summit

There are seven different routes that you can take to summit Mount Kilimanjaro: Marangu, Rongai, Lemosho, Shira, Machame, Umbwe, and Northern Circuit.

The Marangu Route is the by far the most popular, and for a good reason. It's considered the "Coca-Cola Route" because it's much easier and more comfortable compared to other options. If you're looking to summit Mount Kilimanjaro with relative ease, this is undoubtedly the path for you. This route is also the shortest, taking five or six days to complete. 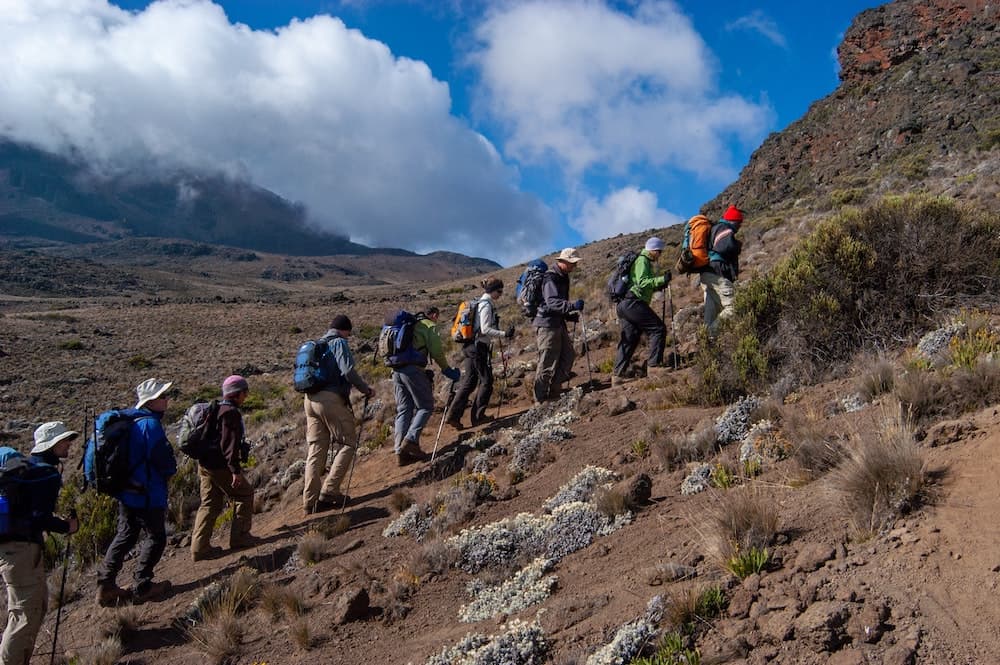 The Rongai Route is the second most popular and is used by about 10% of climbers. It is a longer route, taking six or seven days to complete, but it does not have the same level of traffic as the Marangu Route.

The Lemosho Route is the third most popular and is used by about 20% of climbers. It is a longer route, taking seven days to complete, but has less traffic than the Marangu and Rongai Routes.

The Shira Route is the fourth most popular and is used by about 5% of climbers. It is a longer route, taking eight days to complete, but has less traffic than the Marangu, Rongai, and Lemosho Routes.

The Machame Route is the fifth most popular and is used by about 30% of climbers. It is a longer route, taking ten days to complete, but has less traffic than the Marangu, Rongai, Lemosho, and Shira Routes.

The Umbwe Route is the sixth most popular and is used by about 5% of climbers. It is a shorter route, taking five or six days to complete, but has less traffic than the Marangu, Rongai, Lemosho, Shira, and Machame Routes.

The Northern Circuit Route is the seventh and least popular route, used by about 1% of climbers. It is a longer route, taking nine or ten days to complete, but it has less traffic than the other routes.

How Much Does It Cost To Climb Mount Kilimanjaro?

If you are looking for a more budget-friendly option, you can try to find a group to climb with. Many companies offer group discounts, which can help reduce the cost of your climb. You can also find a company that provides scholarships or discounts for people from certain countries.

When Is The Best Time To Climb Mount Kilimanjaro?

Mount Kilimanjaro is near the equator, so the temperature is consistent year-round. However, there are two seasons: the rainy and dry seasons.  The rainy season is from April to August and November to mid-December. This is the time when most of the precipitation falls on Mount Kilimanjaro. The trails are muddy and slippery, making them more challenging to hike. In addition, there is a higher risk of contracting malaria during the rainy season.

The dry season is from May to October and mid-December to February. This is the best time to climb Mount Kilimanjaro because the trails are dry and easier to hike. In addition, there is a lower risk of contracting malaria during the dry season.

If you plan to climb Mount Kilimanjaro, the best time is during the dry season. For more Kilimanjaro climate information click here.

If you are looking for a great base for hiking the Kilimanjaro we recommend the Kilimanjaro Eco Lodge. Kilimanjaro Ecolodge is an ecological and socially responsible resort next to Arusha National Park, nestled between Tanzania’s famous Mt Kilimanjaro and Mt Meru. Ameg Lodge Kilimanjaro. It has nice spacious rooms, a beautiful garden, , great staff and good wifi.

Mount Kilimanjaro is the perfect challenge if you are looking for an adventure. With seven different routes to choose from, there is a route for every type of climber.

The cost of climbing Mount Kilimanjaro varies depending on which route you take and which company you use, but it currently costs an average of $2,000 to $6,000. The best time to climb Mount Kilimanjaro is during the dry season—which lasts from May to October—or from mid-December until February.

The Serengeti area consists of vast and endless grass plains and the park has the largest wildlife population in Africa. One for on your bucket list for sure!

We feel the Selous Game Reserve is undoubtedly one of the most beautiful nature reserves in Tanzania and we recommend adding it to your bucket list. Here you can still experience the real Africa.