There are European countries that you visit to because of their capital, that is not the case in Romania. Bucharest does have a few atmospheric boulevards, pretty buildings and parks. However it has the effect of being a bit boring within 48 hours. This is because of the unattractive architecture, the noise, the busyness and street dogs. Or because of the air quality: after Athens, Bucharest is the most polluted European city. Luckily fresh air is only a beautiful train journey away. The train from Bucharest to Brasov was one of the highlights of our trip.

In three hours, you'll get from Bucharest to Brasov by train. After passing the city Ploiesti, it becomes one of the most beautiful routes in Romania, certainly the most beautiful that can be done by express train. Sinaia, "the Pearl of the Carpathians" is also on this route. A one-way second-class Brasov costs around 12 us Dollar and first class 20 US Dollar. When you sit first-class you have the benefit that you won't encounter the numerous 'train beggars' who are walking from compartment to compartment. But those who end up in such a wagon miss a crucial attraction of a Romanian train journey: the conversation with a wide variety of interesting Romanian people.

All the food the passengers bring and buy is shared with their fellow passengers: baguette, sheep's cheese and parsley. The conversation is a nice pastime, because the landscape is in the beginning of the journey not very attractive: poorly maintained land with unpaved roads full of garbage. We arrive at Ploiesti, this is a city that was heavily controlled by the Communists, which revolved around the oil industry. When the refineries are out of sight, the landscape breaks open. As far as you can see, breath taking rolling hills. The Prahova river is glistering in the spring sun. The beautiful forests that loom everywhere are pale green. Because spring has started many trees already have small leaves.

Câmpina is located at the foot of the Carpathian. Near the station are old farmhouses with vegetable gardens and wells. After Câmpina, a fascinating landscape unfolds. The train cuts into the Carpathian Mountains, past rock masses and mountain scenery with sheep everywhere. Melting snow creates waterfalls. Mountain meadows are yellow because of the dandelions. Often they are populated by shepherds, covered in warm sheepskins and with a sheep's hat on their heads. Then the first snowy peaks are also visible.

With a shock, the train stops in Sinaia. Sinaia did not escape the ugly communist hotels, but is still worthy of his old nickname - 'the pearl of the Carpathians'. The first sensation when getting off at the pre-war train station is: 'What a fresh air!' An hour and a half away from Bucharest the breathing difficulties disappear and our white shirts don't turn black anymore. Sinaia is a place of royal allure. If you walk up past the beautiful old villas - in the very original Neo-Brâncovenesc style - you will reach the seventeenth-century Sinaia Monastery. The mountain air mixes there with that of the candles. In Sinaia you will also find the Peles Palace which rose in the 1970s. It is considered one of the most beautiful castles in Eastern Europe.

We decided to spend a few nights in Sinaia. We choose the European Flower EcoLabel awarded Hotel Piatra Soimului, which has cozy rooms and apartments. Almost all rooms have amazing views of the mountains. The hotel is engaged in implementing a sustainable form of living through reduced energy and water consumption and selective waste collection. Moreover, the food prepared in the restaurant is fresh and homemade and was served on the beautiful terrace. On a clear day, some of the most beautiful peaks of the Carpathian Carpathia are visible in Sinaia. It is also the base for walks in the Bucegi Mountains, as this stretch of the Carpathian Mountains is called.

With some stunning pictures we decided to hop on the train again. After the stop Busteni, the journey is at its best. The train is enclosed on both sides by densely forested mountain slopes. Almost an hour you will go through a deep forest. Then the final station Brasov. Not a foreigner who's arrived here in the last ten years and doesn't know Maria. One way or another she manages to pick out all the non-Romanians who get off the train. Most of the time, she manages to talk to them not to stay in an expensive state hotel, but at one of the families in the Old Town with where she has many contacts. Maria of Brasov station has become such a phenomenon that she has been pictured in a Japanese travel guide.

When you arrive in Brasov you will first see the communist station and the ugly flats. It doesn't look appealing, but behind those flats lies one of the most picturesque Romanian towns. The attractiveness of Brasov is the combination of German architecture and Romanian melancholy. 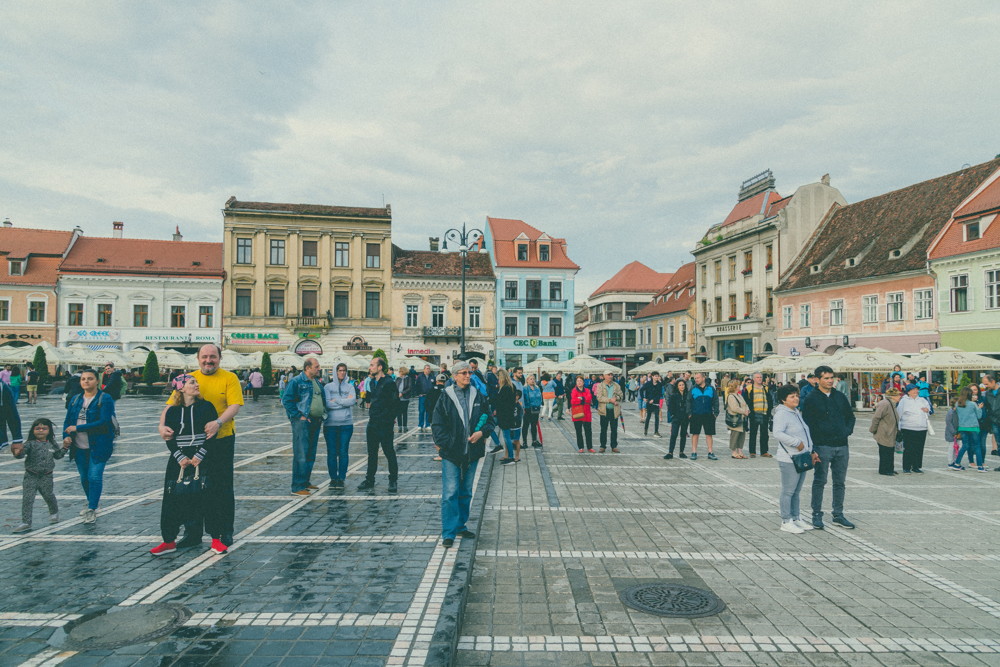 Brasov is beautiful and a great final destination for one of the most beautiful train journeys we ever took.

Written by our reporter and co-founder Jan:

On the Greek island you can discover the rugged coastline, authentic old villages, a beautiful interior and the caves with the beautiful azure water.