Climate and Average Weather in Seychelles

The Seychelles islands have a warm and humid tropical rainforest climate. Because the islands are relatively small, there is relatively little climate variation. The largest differences can be found in the rainfall amounts. The afternoon temperature for all the islands is around thirty degrees Celsius (86 degrees Fahrenheit) in summer months, after which the temperature drops to an average of 24 degrees Celsius (75 degrees Fahrenheit) in the cooler winter months. Because the Seychelles lies south of the equator, the coolest months are June till September and the warmest months December to March. Night temperatures are just a few degrees lower than daytime temperatures.

The area where tropical depressions and hurricanes occur during hurricane season is located just below the Seychelles. This means the islands may experience significant rainfall due to hurricane activity south of the Seychelles between December and May. December until March officially belong to the rainy season, with especially a lot of precipitation in the months of December and January. In addition to the large amount of precipitation these are also very warm and humid months. The best time to visit the Seychelles is from March to November, when you have a pleasant or warm temperature and hardly any or moderate precipitation. April and May are the warmest months of the year, since there is not much wind.

Interested in more detailed Weather and Climate information?
Please select the city you wish to travel to, or the one closest to your destination. Each selected city will show you the following graphs:
1. Average minimum and maximum temperature over the year
2. Average monthly precipitation over the year (rainfall, snow)
3. Average monthly hours of sunshine over the year
On certain pages we also offer other historical weather data like humidity, wind speed and water temperature. 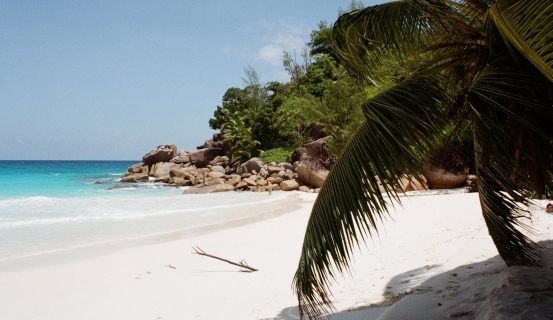 The Seychelles is best known as a bucket list destination for couples and especially newlyweds. After reading this article about the biggest island Mahé you will understand why.

The weather today in La Digue:
Show in Fahrenheit

Staying in La Digue? Check out our extended forecasts.