Climate and Average Weather in Ireland

Ireland enjoys a temperate oceanic climate, due mainly to its proximity to the Atlantic Ocean and the presence of the Gulf Stream. Summers are mild and temperatures during winter can be cool. Spring and autumn are very changeable and rainfall is expected all year round. In winter average temperatures are around 0 degrees Celsius (32 degrees Fahrenheit) inland and there is a chance of snow. However real winter weather is rare along the coasts.

Some years Ireland is struck by a heatwave during summer. But usually temperatures are not very high, the average maximum daytime temperature in Dublin lies around 19.6°C (67.28°F) in July. This makes it the hottest month of the year.

It is often said that it rains a lot in Ireland, but if you a look at the climate statistics it shows that this is only partly based on truth. The west is indeed very wet and has a fairly large number of rainy days. However the east is a lot drier.

What is the best time to visit Ireland?
The period May to September is the best travel time for a general holiday. For a city break, for example to Dublin, you can also go the end of March, April or October.

How is the weather in Ireland in a specific month?

How is the weather in Ireland in a specific month?

An Irish adventure like no other in Killarney National Park

Head down to the South West part of the country, County Kerry, to the small town of Killarney. If you want to experience what Ireland is really all about 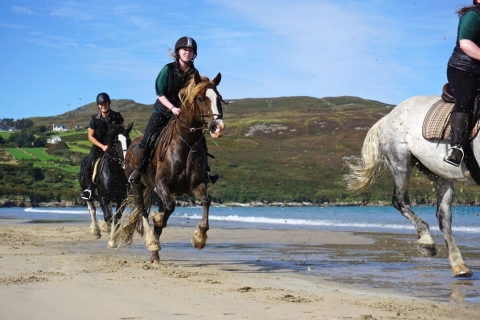 Ireland is the most ideal place in the world for horseback riding. Combine this with the most hospitable people you will ever encounter and you have an unforgettable dream trip to add to your bucket list.

The weather today in Dublin
Show in Celsius