Climate and Average Weather in Croatia

Croatia is a country in the Balkans on the east side of the Adriatic Sea, to the east of Italy. The climate in Croatia depends on the distance from the Adriatic Sea, so most regions in Croatia have different weather conditions. In general one can say that most cities in Croatia offer good weather year around. The city Dubrovnik, a coastal city, offers a typical Mediterranean climate with warm summers and mild winters.

What most people don't know is that in winter you can ski in Croatia, especially in the Medvednica mountains. The slopes in Croatia are at an altitudes of 800 to 1300 meters (2600-4265 ft) above sea level. This makes Croatia a less snow-sure destination than countries such as Austria, France or Italy. The best chance for good snow conditions and thus the best travel time for a ski holiday in Croatia is in the months of January and February.

For a beach holiday, the period May to September would be the best time to travel to Croatia. Temperatures are very pleasant, with average maximum temperatures of around 27 to 30 degrees Celsius (80.6 - 86 Fahrenheit). Inland and on the northern coasts, the summer months are a bit wetter, while in the central and southern coastal areas summer is more dry.

For a city trip to Dubrovnik, Split or Zagreb we recommend to go in the months April, May, June, September and October. July and August are guaranteed to be warm, but can also be too hot and busy.

Interested in the average weather conditions in Croatia in a specific month?

Interested in the average weather conditions in Croatia in a specific month? 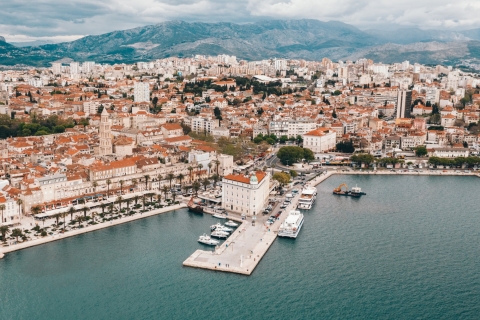 Croatia is an idyllic sailing destination, boasting 1,777 miles (2,860 km) of beautiful beaches and pristine waters. With over 1,000 Islands dotting the Adriatic Sea, there's a perfect spot for everyone.

Must visit in Croatia

The weather today in Split
Show in Celsius