Abkhazia is a self-declared sovereign state that is recognized by most countries as an autonomous republic of Georgia. It has a warm oceanic climate in the lower parts and along the coastal areas and a temperate continental climate in the mountain areas. In the mountains it is considerably colder than in the much lower part of Abkhazia. The supply of cold air from Central Russia is often stopped by the Great Caucasus. Hence, the low areas of Abkhazia have an average maximum temperature between 10 and 12 degrees Celsius (50-54º Fahrenheit) in winter months.

The winter period runs from December to February, after which the months March and April are changeable. Sunny, warm days are mixed with cool and grey days. In May the average maximum temperatures is already increasing and it gets nice and warm.

What is summer like in Abkhazia?
In the months June, July, August and September you will experience high summer temperatures ranging between 24 and 30 degrees Celsius (74-86º Fahrenheit) during the day. The sun is seen an average of seven to nine hours per day. However with an average of 108 mm (4.2 inches) of rain in the capital in August you will also have some rainy days. The combination of a lot of precipitation with pleasant temperatures creates a beautiful mountain scenery that makes Abkhazia so special.

How is the weather in Abkhazia, Georgia in a specific month?

How is the weather in Abkhazia, Georgia in a specific month? 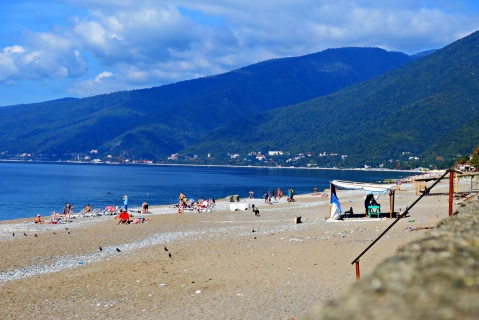 Forgotten tropical land of the former USSR - Abkhazia in 5 steps

Abkhazia is one of the most interesting places I have ever visited. I often had the impression that I was traveling around a tropical museum of the former USSR.

The weather today in Gagra
Show in Celsius